End of an era

The movie industry has a huge problem on its hands. With companies like Warner Brothers, Miramax, Walt Disney and Sony pictures green lighting less and less movies per year the opportunity to find a smaller budgeted film in a world full of huge explosions is withering. For example, would you, as a studio, green light a picture with a 100 million dollar budget that could potentially net you riches of upwards of 300 million dollars (that is save a studio money) or would you prefer to green light a rather pedestrian budget of 5 million with the potential to lose the 5 million or possibly squeak out a mere 1 million if you are lucky? Ideally, the film industry should be worried about the experience that people are having in the theaters and should be introducing a lower cost in order to combat bootlegging. I assure you that if prices came down from the industry average of $8.38 per ticket to a more reasonable $5.00 a ticket that less people would bootleg movies and or download them from file sharing sites.

The model for lower cost to build consumers is a basic economic term called supply and demand. Let’s assume that the demand stays stagnant and the supply curve lowers the total cost of said item: 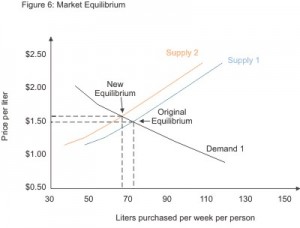 As you can see from the basic diagram there is a dollar amount and a total items purchased amount. If the demand for said item stays stagnant (people who want to see movies) and the price is dropped (in the figure it is a lower dollar amount) than more people will physically go to the movie and less people will bootleg the movies.

If you are well versed in the gross sales per year of movie tickets sold than you could argue that although there is a bootlegging problem growing that movie tickets are actually up (11.6 billion). However, if you factor in inflation and the lost revenue from an industry that has gauged its consumer, than the amount of loss revenue potential deviates into a black hole of lost earning potential. How much that loss is would be extremely difficult to ascertain.

I love movies, but my choices in movies are usually more in the documentary or independent film basis. I just hope for the sake of the industry that the fat cats who greenlight films understand that although the risk/reward for a big budget film is bigger than that of a smaller budget film the potential for the one film to be a great film is actually a statistical anomaly. I base that idea whole heartrendingly on the basic flip of a coin. If the coin is flipped fifty times you may end up with twenty five tails or possibly no tails at all. The basic premise being that for every movie that is made there is a potential that it will not reach an audience thus not make any money. If you can only green light ten films a year due to budget constraints that your potential for earnings is based on the five movies that will be successful. What if those five movies happen to be the lower budget films and your studio doesn’t make their money back?

If I was a large studio I would produce a large number of independent films based on risk/ reward, but that is because I am a conservative spender and would trust that the film-makers would honor their budget. Even if I made ten films at three million a film that is only thirty million dollars and the potential for one of those films (Blair Witch Project) to make 100 million dollars is higher if I mitigate my risk.

So what is going to happen with the film industry? I predict a large backlash to bigger films or a premium being placed on bigger budget films. For example, if you want to see this independent film it will cost you ($5.00) but if you want to see the new Die Hard (15) it will cost you ($10.00) based on budget. I am not saying that the model will work I am merely demonstrating the ignorance of the film industry who have been proposing such an idea even-though the idea of tacking on a premium to big budget films would only encourage more bootlegging.

I would wish them luck but they wouldn’t know what to do with it. They would probably make another Die Hard with it. Die Hard 15: wishing luck.